Meet the Cast of Rudek and the Bear

A guide for new readers.

As I’ve developed this comic, I’ve realized that it can be hard to keep track of all the soldiers and smugglers that have entered the scene. So, I thought I’d introduce them to you here. Hopefully this will help new readers get acquainted with the cast of Rudek and the Bear. For notes on the relative ranks of the soldier characters, scroll to the bottom. 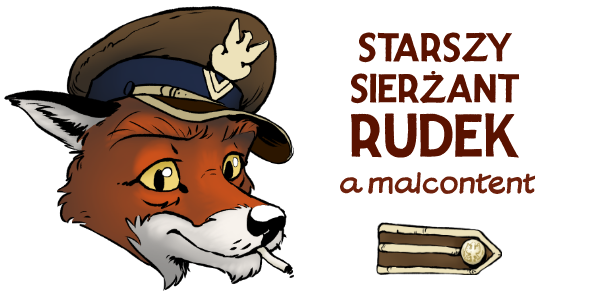 Rudek is a fox with unknown troubles in his past. He enlisted in Haller’s Army at 17, just in time for the tail end of WWI and the Polish-Ukraine conflict. He has bad memories of the battle the Polish call The Defense of Lwów, but the nature of those memories is unclear. At some point, he transferred from the army to a company of the Korpus Ochrony Pogranicza that patrols a godforsaken stretch of the border with the Byelorussian SSR. Why? Perhaps to get away from his bad memories, or sort himself out.

Recently promoted to the highest NCO rank, Rudek nonetheless seems unhappy in his military career. He is an avid reader, and is studying the Byelorussian language. He’s not above pulling a prank on his comrades, and is well liked. However, he doesn’t quite fit in. Time will tell what he decides to do with himself.

Finally, Rudek is the only member of his company that maintains an under-the-table association with smugglers. He plays cat and mouse with Masha and Malutki, often getting the better of them–and getting discounted or free tobacco in the process. 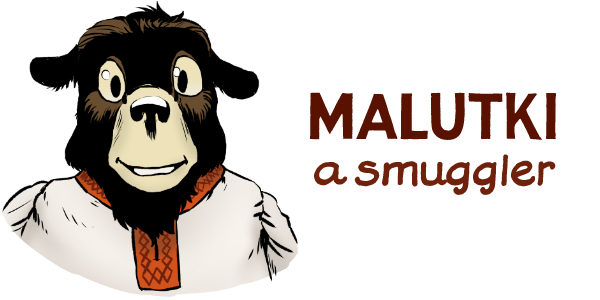 A smuggler in partnership with the wily and ruthless Masha, this bear nonetheless doesn’t seem cut out for high-stakes smuggling. A Belarusian with a yet unknown background, his phlegmatic and sociable nature makes him good at networking–but resistant to crushing the competition. He sometimes questions Masha’s business practices, but as they usually successful, he lets things well enough alone.

For some unknown reason, he keeps his real name– Ilya Jaromirovich Mednik–guarded. Rudek gives him the nickname “Malutki” (meaning “little guy”), and it serves him well enough as a nom de guerre.

Malutki treats his business associates with respect and humanity–even Rudek, who should be considered an enemy. For this reason, a real friendship gradually develops between the two. 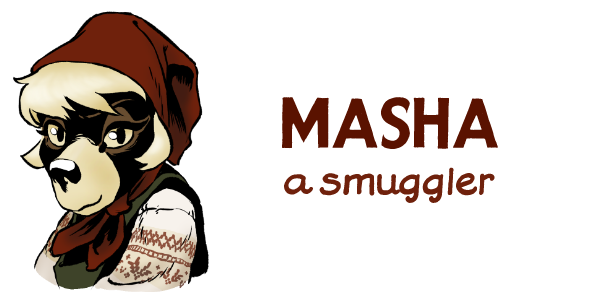 Masha, or Maria Mikhailovna Vereshchatnikova, is a dispossessed Kulak. Whatever became of her upper-middle-class family is unknown–but she does seem to have a chip on her shoulder when it comes to the Soviet government and Communism in general. You might call her a smuggler–but she sees herself as a kind of reactionary capitalist: working hard to put her competitors out of business, corner the black market, and turn a tidy profit. Unlike Malutki, Masha resents the interference of Rudek, and is always looking for a way to get the upper hand. 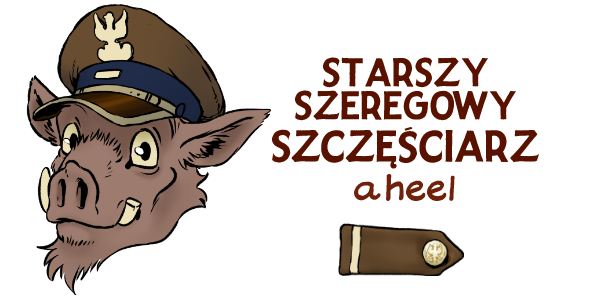 (Szczęściarz is actually currently a Kapral.)

As one reader pointed out, Szczęściarz is the Company Fool. His limited perspective tends to make him unpopular–the butt of practical jokes, the guy you avoid in the mess hall. His whole reason for following a military career seems to be the perks that come with rank. When you outrank someone, you can remind them of it all the time. While his name means “Lucky,” Szczęściarz is sometimes lucky, and sometimes not. The main thing is that he doesn’t seem to correlate his own attitudes and actions with the outcomes. While his promotions (here and here) are just matters of administrative necessity, he believes he has earned them and deserves them. 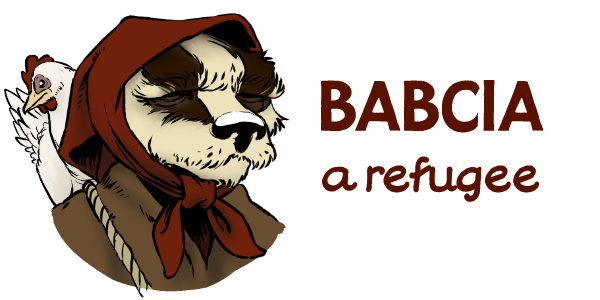 For as long as Rudek and the others can remember, this tenacious old lady has been trying to jump the border. All the barbed wire, trapping pits, and armed checkpoints in the world won’t deter her efforts. She and Rudek seem to have a friendly relationship; but no matter how many times she asks, he will not open the gates and let her in. However, she might just be playing games with him. She may in fact cross the border all the time, unimpeded. So here’s the question: is she really a refugee trying to escape communism? Or a smuggler? Or is there some other explanation? 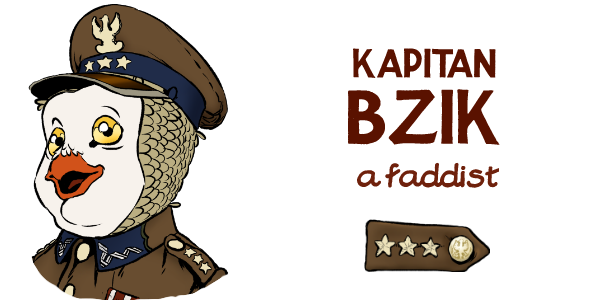 Rudek’s company has the misfortune of being attached to company headquarters. This means lots of exposure time with the company’s commanding officer, Kapitan Bzik. Lots of meetings and presentations where he explains new fad military theories. Lots of micromanagement. Lots of uncomfortable invitations to his office for a nalewka–his own special blend of vodka, molasses, and an ill-advised mixture of herbs and God knows what else. While Bzik’s theories and fads can be a pain, they can also keep his head in the clouds. This means that all kinds of shenanigans fly under the Kapitan’s radar. 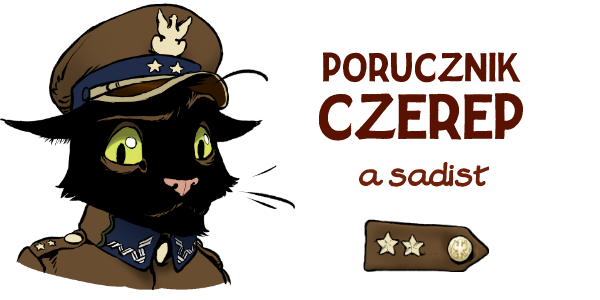 While it’s not too difficult to stay on Bzik’s good side, the Porucznik is another matter. Czerep is directly responsible for the company’s personnel, and takes his job–er, his rank very seriously. If you cross Czerep, expect to feel the repercussions forever. He’s an egomaniac who doesn’t take criticism well–even indirect criticism. All of the other soldiers–except Nina–report to Czerep. 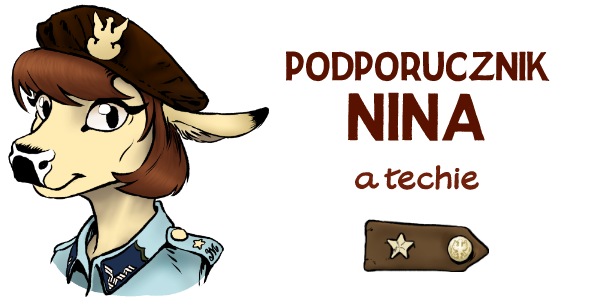 Nina is the radio operator at headquarters. She enjoys tinkering with the equipment, often making modifications and improvements. But her skill with machinery has yet to be fully appreciated. As a junior lieutenant in the Women’s Auxiliary, specially assigned as adjutant to Kapitan Bzik, Nina enjoys the priviledge of not reporting to Porucznik Czerep. While off duty, Nina carries on a clandestine relationship with Kapral Szpadel. While on duty, she does her best to ignore his often childish advances. 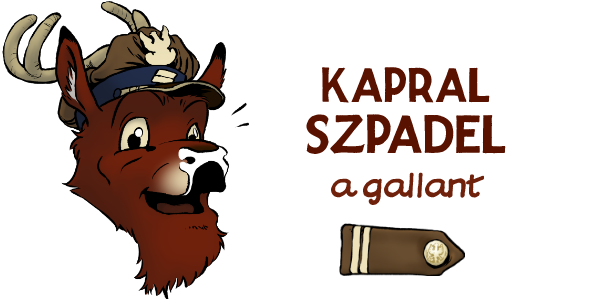 Szpadel is generally a decent guy. He does his job, has a few laughs with his comrades, and keeps his uniform tidy and his boots shiny. But his favorite past-time is his amorous pursuit of Nina. Of any of the soldiers in the company, Szpadel is Rudek’s closest confidant. He’s trustworthy and seems to appreciate the absurdities and humor of military life. 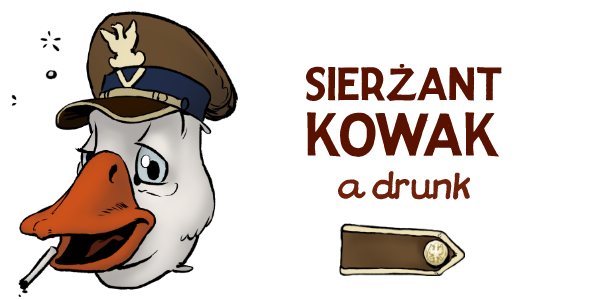 Kowak is the quartermaster and cook for the company. But he feels that he could be more. In fact, he feels that he was passed over when Rudek was promoted and put in charge of a patrol squad. He’d like nothing more than to discredit Rudek and rise in the Kapitan’s estimation. As the saying goes, he drinks because he’s unhappy, and he’s unhappy because he drinks. If he sobered up for a minute, his schemes against Rudek might come to fruition. 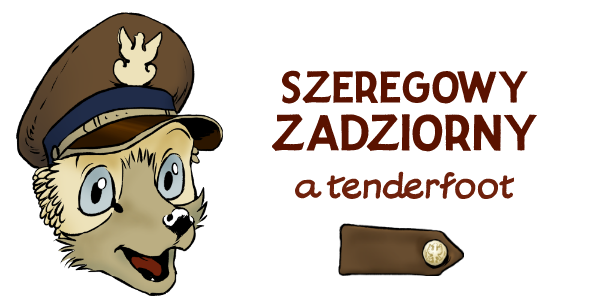 Zadziorny is the company’s newest recruit. Most of this comrades are helping him learn the ropes. But Szczęściarz sees in the young hedgehog the opportunity to lord it over someone. But whatever happens, Zadziorny tries to keep up a positive attitude. He frequently writes home about his adventures in the KOP, glowing about “the military life.” 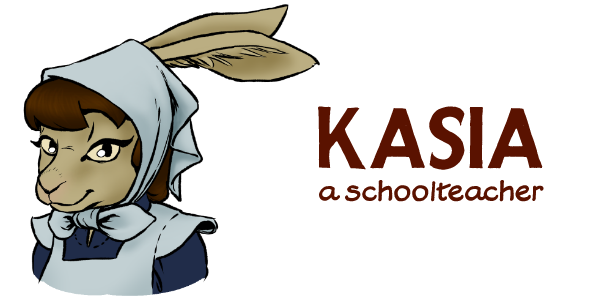 Kasia teaches grammar school in Stołpce, the border town closest to company headquarters. She moved to the area after the borders between Poland and Belarus were redrawn, because she sees it as her duty to help the Byelorussian children integrate into Polish culture. Whether that’s a good or a bad thing remains to be seen. But politics aside, Kasia’s first priority is the well being of her students.

You’ll meet other characters along the way–refugees, soldiers, smugglers. But I don’t want to spoil anything! Go read!

Ranks in the KOP

Below is a chart showing the rank system, to help readers understand who reports to whom in the comic. 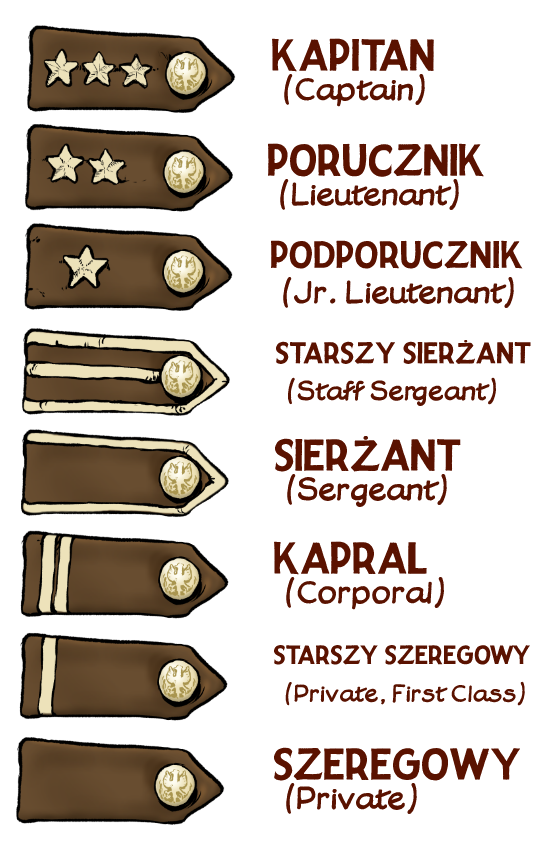 The top three ranks are officers; the rest are enlisted ranks. There are some Polish military ranks that are not represented in the comic, and others that would not have been current in the KOP of the 1920s.