I wasn’t sure about this one, because it’s a little weird to have livestock in a world of anthropomorphic animals. But I couldn’t resist illustrating this idea. The babushka doesn’t seem too surprised that her plan has failed.

I tried a couple experiments with this one. Like the experiment with this comic, I ultimately decided not to use any of the attempted methods in the final comic. But here are some thoughts.

First, I tried a painterly approach. I lowered the opacity of the brush to something like 90%, and used the eye-dropper tool extensively. I got some effects and textures I liked, but felt ambivalent. 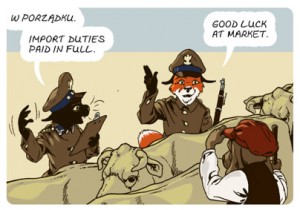 I also tried this method:

I think there is potential in this method. But next, I’m going to try the more traditional approach to using “cuts” in comic coloring. If I like how that comes out, I’ll post that next!